So I was tagged by Amy (the Savy Celiac) to post “7 things you may not know about me,” and those of you that do know me know that I’m terrible at following tag rules, so here are my 7 happy thoughts from this week:

1. snow – We woke up to another beautiful blanket of snow.  As nice as it was to have rain last night (a promise of Spring on it’s way), I’m hoping we’ll be able to move quite a bit without the rain this evening.  🙂

2. at home – As we hung Mimosa last night, I looked around and felt “at home.”  It will be tight, and a bit loud, but it will be home, and we will be very happy there (again).  🙂  Mostly, I believe it was a peaceful feeling, reminding me that though the next week may be stressful, the decision is right.  Definitely a needed reaffirmation. 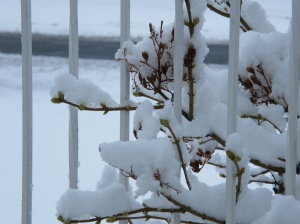 3. good things do happen to good people– The last few nights, we’ve loaded boxes in the mini van, taken the load to the condo, and stopped by the two grocery stores in town to replenish our box supply.  Living in the designer’s home town does not usually remind me of his “growing up” anymore, for we rarely run into people together.  But last night we ran into several people that he knows at Days Market.  One of the guys working there was telling us about his home he will be building this summer on .85 acres, along the hillside in Midway overlooking the entire valley.  He bought the land long ago (that he paid off the first year he owned it), for a mere $18,000 (today, even in this slow economy, the land would probably sell for about $300K).  Then he told us about family that will be helping to build his home that they will move in by the end of Summer.  I don’t know.  Something inside of me swelled and I was just soo happy for he and his family.  Yes, good things do happen to good people!

4. princess – the builder has been calling me “princess” this week.  Why?  I’m not quite sure, but I’ve truly received the royal treatment and it’s made things so much easier.  Its a reminder that I should be treating my kiddos, family, anyone I see just like royalty…what a beautiful world this would be?

5. all gone – I’ve not been as on top of the laundry as I would like while packing, so it seems we are always running low on Princess Underwear for the dancer.  The other night I explained that I needed to wash some so she would have a pair the next day.  Her reply, “Princess all gone momma, need to get some more at the library!”  I’m glad that the kiddos are happy borrowing from the library…though I don’t foresee being able to borrow everything there…even in these tough economic times…:)…I’m doing more laundry today.

6. milk – It’s official! I’ve been watching the explorer this past week, and its true: his first ASL sign is milk.  He will even tell me when he wants some…:)  Now that he’s ready, I’ll have to be sure and have him watch Baby Signing Time more regularly.  Thanks Jenn and Rachel!

Sending love to all of you and yours…have a wonderful weekend! x0x0, katrina