While the builder was at preschool this morning, the dancer and I painted (and the grower played with letters and ate a snack).  I have a couple very large canvases I needed to prep.  She was not interested in prepping with me.  The dancer had painting plans of her own.

This mischievous muse has been getting into everything lately.  Last night, before bed, she’d told the designer she wanted to paint, climbed up on to the counter, opened my cupboard of paint supplies, and pointed to the acrylics.

This morning, she began with stamps, then used the acrylics.  Finally, she painted some of the stamps.  Looks like we need to pull out the clay, make some figures, and paint them.  🙂 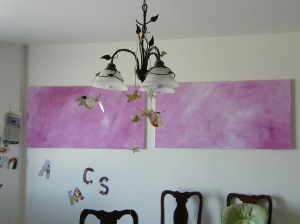 As for my canvases…it is a 48″x24″ painting for my Grommie’s new condo.  She loves David Hockney and her favorite color is lavender.  The kiddos and I drove to the North Fields and studied the lanes and large trees lining the fields.  With these things in mind, I’ll be doing my largest painting yet.  I struggled for quite a while, trying to figure out where I would paint such a large piece without a proper art studio.  Finally I decided to remove some paintings in the dining room, hang the canvas: high.  It will remain there until it is completed.  I’m hoping the kiddos will leave it alone during the day as it will be wet from each night’s work.

There are two canvases.  When Grommie’s canvas arrived, it was already ripped.  (The wrapping, however was fine), so I’d taken some photos and called Utrecht.  They were good enough to send me another.  The designer felt it was silly not to use the canvas.  I have taped the back and will find some way to fill in the gap.

The paintings will combine to make one 8′ long scene.  The size and new undertaking is no longer daunting to me…now I am just excited to begin.  Hopefully, I’ll be able to start sketching tonight…:)