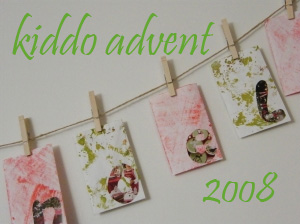 A wrapping adventure with auntie Dez.  I warned her it would be a mess.  I think it is hard to imagine life with three small kiddos until you’re in the thick of it.  🙂  But as she said, “I’m just rolling with it!”  She was so patient with the builder and let him wrap with her.  The dancer was happy cutting and tearing.  Later, Dezzer was wrapping a blue rubber ducky for the kiddos, and the dancer wanted to hold it (she had already seen what it was), the builder wanted to open it (thus the reason our wrapped presents are not under the tree…).  We convinced the builder to go hide in his room so that Dezzer could wrap something for him.  He was so excited.  The energy was bouncing out of him as he bounded back to his room.  We got quite a kick out of him.   Oh the joys of little ones and wrapping!