A couple Christmas commissions I neglected to post:  Sara suggested paintings of her inlaws’ childhood homes.  Both grew up in Salt Lake.  The first home is her father-in-law, Steve’s home, who grew up in Murray.  The second is Jackie’s which is in a Country Club neighborhood.  I loved that they grew up not too far from one another, but probably far enough that they never met until later in life.  Yet, their homes were so similar.  Both are red brick and have a similar architectural style.  They each had expansive green grass out front. 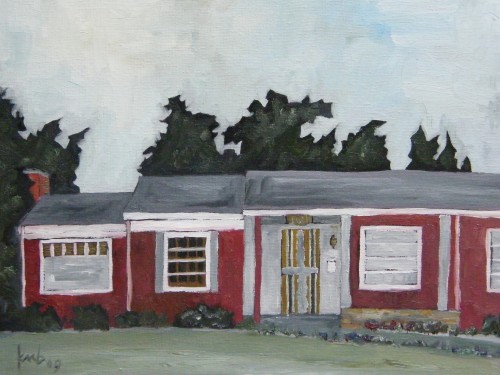 The next project is to paint their home they have shared together while raising their family.  It is a lovely Heber ranch home, with a tree-lined driveway and speed bumps so their teenagers and their friends would drive carefully.  There are at least three large sheep/ranch dogs that greet you when you pull up to the house…I love that.  A wrap around porch, large grassy yard, and an amazing playhouse out back for the now grandkiddos.  The designer spent a lot of time over there with Tom and their friends when they were growing u.  Now the kiddos and I spend time playing with Jack + Will, and Sara, enjoying some of the same things.

Thanks again Sara, this project was so enjoyable!

Leave a Reply to delightsgal x