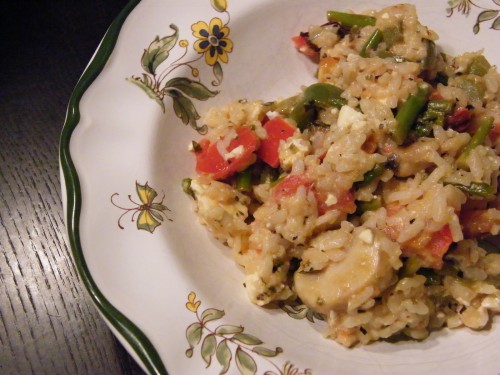 During the weekend of the move, our good friends brought us dinner: baked squash (butternut I think), a green salad, rolls, chocolate, and amazing stuffed peppers!  We’ve made them several times since and let me tell you…this is an easy dish you can whip up quickly, change a bit and it is still absolutely delicious!  Thank you soo much Stacee!

I followed the recipe in the first photo…other than adding the asparagus.  Since then, we use just whatever is lying around: veggies, swiss emmental cheese, quinoa…seriously good every time…

And here is Stacee’s foolproof recipe:

I accidentally doubled the tomatoes in the one I made you guys–I doubled this recipe last time and read my notation to double when I was adding the tomatoes.  I guess if you like tomatoes, it doesn’t hurt it!

Notes: Can substitute 14 ounce can of diced tomatoes for fresh tomatoes.  Any fresh herbs like oregano or basil just makes this better.  We also like adding sliced mushrooms to it–saute with the onions.  I’ve used yellow onions instead of green, brown rice, white rice and even orzo–arborio just gives it a rich/creamy flavor.  I plan to try quinoa one day or maybe mix rice/quinoa.  That would probably be good too.  Last night I added two diced green peppers with the onions and just mixed it all together. ~ Stacee