I love running into friends from the past.  A few weeks ago, the kiddos and I finally made it to Story Time at the Library with Miss J and found my friend Robin, with her five kiddos.  We were study buddies and classmates when I began the Early Childhood Education Program at the Y.  Soon she met her hubby and was engaged and married before we knew it.  Her 5 kiddos later that I haven’t met is a confirmation that it has been a while.  🙂

The Heaths joined our kiddo daily delight fun this morning.  We read Pumpkin Soup together, and enjoyed the tale of three animals, who made a perfect Pumpkin Soup together.  They each had a job and did it well.  That is, until one day, when duck decided that he wanted to stir the soup.  Trouble errupted and after a quarl, duck left his friends.  The animals mended their ways and learned to give eachother turns making the soup and playing music…that were new to them and usually ended in a mess or uninvited sounds.  Truly a delightful library find.  Definitely a great addition to a home library as well.

We then looked at one of my favorite cookbooks together and talked about what makes up a recipe.  After discussing the ingredients the animals in the story used, we rein-acted their cooking process of chopping, pouring, stirring, and measuring.  Then we used a soup pot, wooden spoon, and play food, to make our own soup together.  Each kiddo chose an ingredient, identified it and decided how much was needed in our soup.  In the end, the builder called it “Leprechaun soup.” 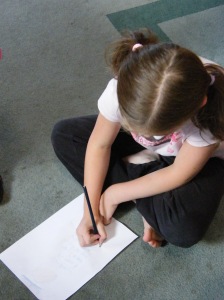 Then the kiddos set to work, creating their own recipe.  The older girls drew their dish, wrote the ingredients, and detailed instructions…I was impressed!

As for the younger kiddos, some drew pictures of their ingredients or dish, or dictated it, like the builder.  It was a wonderful morning!