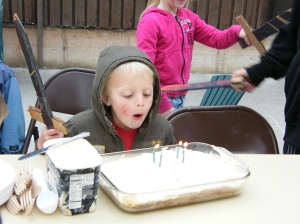 Wow, it’s been a whirlwind of a week.  It’s been a challenge to just take a breath every now and then…:)  We anxiously awaited the builder’s birthday party all week.  Full of friends, family, and of course; pirates!  There are tons of photos in this post, so I hope it makes up for the lack earlier this week!

In kiddo daily delight style, there were several activities and games that required no purchases, simply made from things around the house.  Our wish was granted: the rain stayed away until the end of the party!

As the guests arrived, we invited them to get pirately painted…

No, they weren’t all up for it…some of the girls chose to have Becca paint them later.  🙂

Next, they painted their pirate swords.  The designer and my Dad worked hard on these wonder toys, making sure they were strong and reinforced with duct tape.  I think this was a highlight for the kiddos.  We had to hide them in the garage so they could dry.  Once they were dry, they were inseparable from our little pirates.

As a few finished their swords, we began pirate says.  A captain calls out sailorly duties, but the players only perform when first called to “attention.”  This was a fun game, our only challenge was that everyone wanted to be the captain.  🙂

Another game, pirate pirate captain Hook(a variation of duck duck goose).  Every time, a pirate was tapped “Captain Hook”, all of them would get so excited and would chase the tapper around the park.   The other adults and I got a great laugh out of this, and let them play their own version.

At this point, we followed the Captain, Jonny, we sang, and marched to the tramp:

At the tramp, the designer and my dad helped the lil’ pirates take turns walking the plank:

The brave pirates even had the plank raised!  They were great to follow directions and wait their turn.

It was beginning to get cold.  We went back to the “park” to play pirate chase.  The pirates chose a pair of my stockings, wore them on their heads, and ran around trying to grab them off the heads of the other pirates.  This was oh so fun. They played it a few times.

I went in to paint a pirate ship upon the cake.   The Nigella Lawson “autumnal birthday cake,”  had a light and fluffy icing, so the water & food coloring was interpretive at best.  I decided that as long as the builder knew it was a pirate ship, that was all that mattered and I will improve on the next cake.  🙂

As I workded on the cake, the kiddos were out drawing with the chalk I’d brought.  They made some wonderful drawings.  I had intended to draw a bird’s eye view of islands and let them jump along them in search of treasure, though they had a blast with their own creations.

After some cake and ice cream, the pirates chased Jonny with their swords…it was quite a site.  Jonny was soo wonderful!  Thanks to everyone for all their help.  The builder had a wonderful day!