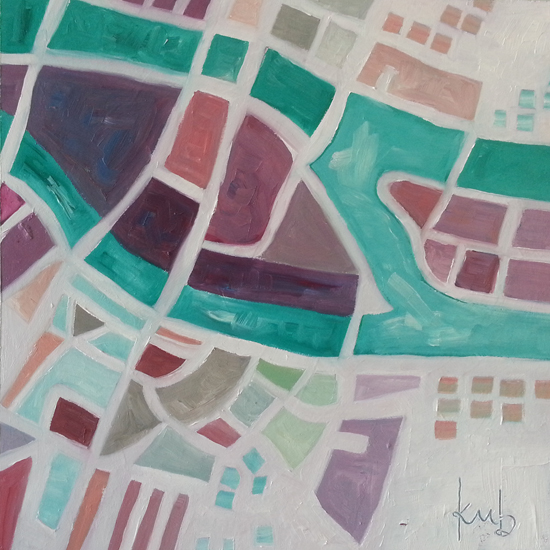 While designing and building our home we tried to find as many re-purposed items as possible to fill the home.  At first it was to avoid the new and be a bit greener.  Then we found the benefits in price, and later, the realization that the home would never look like a typical new construction because there were so many old things within.  Even now I’m surprised when asked who were the home’s original owners.  It tickles my funny bone and makes me smile.

We gathered old doors to put throughout the interior, the only new door was a custom barn door that separates our Master Bedroom from the hallway and stairwell.  Wanting it to be a piece of artwork, we had our talented friend James Hendricks build it from the same wood paneling upon which Kent Winterton makes for me to paint.

I imagined abstract maps, birds-eye views of places special to Carl and I.  The entry side, would be depicting the Manti Temple, and it’s surroundings, where we were married and sealed for all eternity.

One week after we moved into our home it was confirmed that I was pregnant.  I was already sicker than I’d ever been in a previous pregnancy, so it was not a surprise, but I was in no condition to start painting, let alone unpack the way I desired.  Little did I know it would be twin boys or that I’d take to my bed for 3 months to ensure their safe arrival.

The babies turned 1 the end of  February and although we feel we’re resurfacing in many ways, I realize that painting the barn door might be too much at this time.  With it’s large 8×10′ size I know it would take 3 weeks to two months with little interruption.  Twin toddlers and little interruption seem to be unavoidable right now lol.

Instead, I’ve begun painting mini versions of these “mapstracts”…as I’ve decided to call them.  Small paintings depicting some of my favorite places in which I’ve lived or traveled.  The first 3 are all from Paris, France. 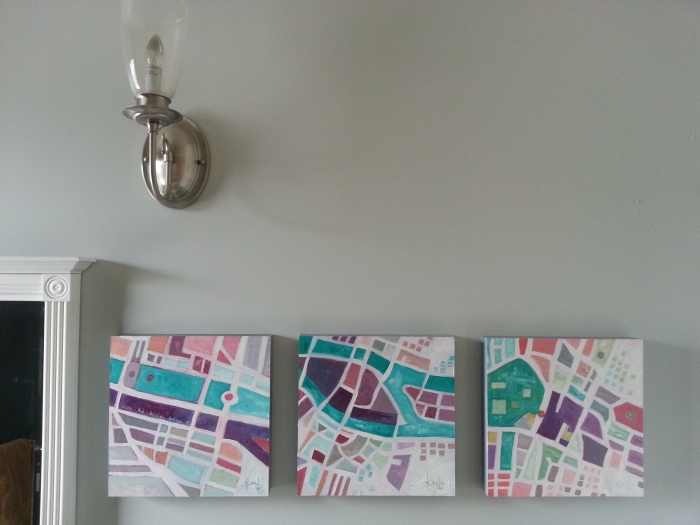 The kiddos helped me pick up my work from the Greenroom Gallery show in Salt Lake Thursday and we delivered a painting to our new friend Holly, who shared her excitement for the mapstracts.  She wants to give them as gifts for return missionaries which I think is a simply fabulous idea.  If you have a special place you’d like to see as a mapstract, email me at trinaberg{at}gmail.com or leave a comment below.  Perhaps it is the place you met your sweetheart or where your first child was born, where you were married, studied, or a favorite travel destination.  My fabulous cuz Gretchie-Love is the most anglophile American I know so I will need to do some London mapstracts next.  So excited! 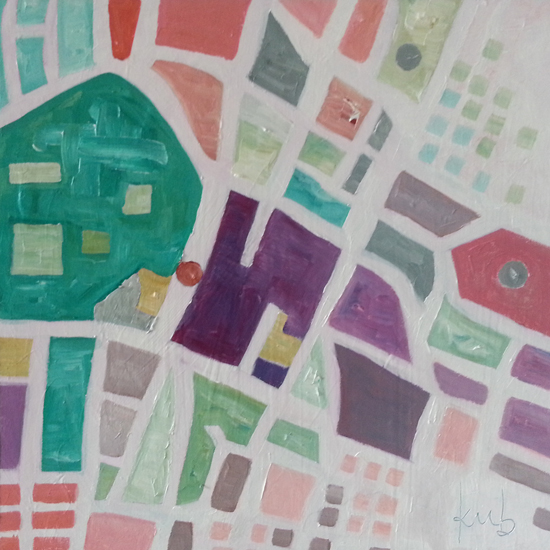 One thought on “mapstracts {a new painting series}”